Alright, let's get the bad news out of the way early... There's no magic trick to booking a gig. It's going to take time, effort and a whole bunch of emails.

If you’re early on in your career, don’t expect to get paid. Bands are paid based on how many people they can draw. If you don’t draw a crowd, you don’t get paid.

Your friends are not your fans. They like you for reasons other than your music. Fans are people who regularly come to shows.

Finally, and this one may be hard for some of you to hear, but no one cares about your music. Venues are interested in selling tickets and drinks, not seeing your new 24 track concept album performed live. You need to sell the venue on how this show could benefit them.

Ok, now that all the ugly stuff is out of the way, let’s talk about how to book a live gig!

The first step is simple, and hopefully, you’ve already crossed it off the list …

Step 1: Be Active in Your Local Music Scene

No one likes to do business with strangers. Meet bands. Introduce yourself to the venue staff. Remember the bartender’s name. Be nice to everyone.

This goes for social media too. Like venue pages, share band events and comment on posts. Be active in the community and make people want to give you a chance!

Part of picking the right venue is being able to fill it. If you usually draw 50 people on a weekday, there’s no point in trying to book the 1000 capacity theater. Even if you do get the show, it’s going to suck.

A good rule of thumb is to book a venue that’s too small rather than too big. It’s always better to pack a smaller venue to capacity than have empty seats in the biggest club in the city.

Sure, it might be cool to be able to say you played at House of Blues or whatever, but if the show sucked does it even matter?

Don’t: Don’t email venues you have no place performing at. It makes you look desperate and shows you can’t be bothered to do your research before asking for help.

Once you find the right venue, check out their calendar and find what nights they typically have acts like yours perform. Then, find a few dates they haven’t booked yet, and put together a package for them. You want to make this as easy as possible on the venue. The less work they have to do, the more likely they are to book you.

Don’t: Don’t ask the venue for any favours. Why would they let you open for Jack Parrow if you have 89 Facebook followers?

Step 4: Put the Bill Together

Once you have a few dates in mind, start looking for bands that would be a good fit for the show. It helps if you can find bands that the entertainment manager is already familiar with, or that have played at the venue before.

Don’t: Don’t ask the venue if you can open for Popular Local Act. How would that benefit the venue?

Step 5: Do Your Research

After you’ve got a few bands willing to do the show, prepare some numbers for your pitch. Do some more research and have stats on the following ready:

Don’t: DO NOT lie about your numbers. They’re relatively easy to check and inflating these numbers is only going to hurt you in the long run when you turn out to be less popular than you said you were.

Now that you’ve got a package together, it’s time to bring it to the venue. Remember, your goal here is to sell the venue on how this show could benefit them. The less work they have to do, the more likely you are to book the gig. Show them that you’re prepared and professional.

That starts with an email. Have a read through this series on sending cold emails by Jordan Longlace

Do some research and find out who the entertainment manager or promoter for the venue is, and send them a personalized email, including their name.

If you’re just looking for a shot, be honest about it. Explain to them that you’re willing to prove yourself and play for free on a slow night.

Once you’ve finished your email, proofread it. Then edit it. Then proofread it again. First impressions are everything!

Don’t: Don’t send out vague email blasts. Be specific. Tailor your pitch to the venue. Read Jordan Longlace's series on this!

If you don’t immediately hear back, don’t panic. Venues tend to get a lot of emails from people they don’t know asking for favors and it can be difficult to break through the static.

After a week, send a follow-up email. Don’t just resend the first one, write a new email with a new introduction that explains it’s a follow-up.

Don’t: Don’t be annoying. There’s a fine line between being persistent and being annoying. Find it and never cross it.

When you do finally get the gig, just remember to work hard and stay humble. You’re not a rock star yet and still need to pay your dues.

DON’T: Don’t go crazy on the rider. Just because you can, doesn’t mean you should. Being easy and agreeable goes a long way. Don’t ask for sushi.

The easiest way to book a gig is to do a good job at your last gig. If you promote the show, draw a crowd, perform well, and were easy to work with, then all it takes to book a second gig is a simple follow-up email.

Welcome to show biz, baby! Maybe next time you’ll get your name on the marquee! 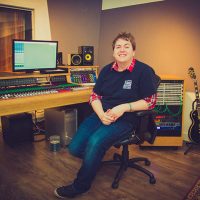 Brad Pack
Brad can be found in the mosh pit.

Music A Medium That Engages Us All

Our #1 Most-requested Feature Of April